By Calvin Correli
Under From Inside the Walls
2 min read 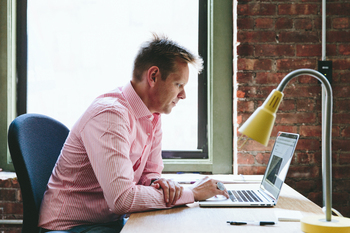 For most of my life, I've been self-employed, and working from home. Even during the short periods when I've been employed by an outside company, I've rarely gone to an office.

But that doesn't stop me from trying. Many times, I've been sucked in by the lure of having a separate space for work and for non-work, of going to a place with other people. But each and every time, I end up concluding it's not for me.

Recently I read this post by my friend Lauren Fritsch, and it just hit it home for me: I'm not an office person.

The first month or two, I'll feel a burst of excitement, as I start going to the office. New neighborhood, just the feeling that it's fresh, that I'm taking myself and my business seriously.

But pretty quickly the excitement fades, and what I'm left with is the fact that my apartment has the most gorgeous view in the world, and a wonderful kitchen, and all sorts of other delights that I'm putting love and care and attention to every day.

Why go to a dark and cramped place without the facilities that I really care about. They may have great coffee, but I don't drink it. They may have ice water with citrus fruits, but it's not filtered.

And having two separate spaces to give consciousness and energy and love ends up spreading me too thin. It takes effort to invest energy in a space, I'd rather do it with one space than two.

So slowly but surely I stop going, and I'm left paying rent for something I'm not using.

Yes, at some point when we're 5 or 10 people, all working in New York, we may need an office. And I may end up going more often than not.

But until that day comes, I'm just going to let go, once and for all, of the idea that an office would be good for me.