Getting Things Done, in Two Variants

Getting things done is important. We work on the energy, we blechschmidt, we visualize, we do all of those things. But at the end of the day, we still need to get stuff done.

Here are two of my favorite hacks for getting the most important things done reliably and consistently.

My life takes different forms at different times. A few months back, I had many projects going all at once. I was applying for my visa, I was overseeing different development projects, I was blogging, I was following up with various contacts, I was practicing my voice, I was exercising, I was ... I forget all the different things, but there were quite a few.

The strategy I developed to deal with it all, was to touch each project each day, and move the ball forward, if only a little. Each day, I'd start with a to-do list consisting of each important project, and I'd make sure that I did at least something to move each one forward.

What that accomplishes is it gets you started on each one. For some of them, you might catch the bug, be in the zone, and be really productive. For others, it might feel like pulling teeth, but at least you're getting something done. Hopefully it'll shift around from project to project as the days roll on, but even if it doesn't, it allows you to work with your energy, instead of against it.

What it avoids is dropping a project completely, and suddenly discovering that nothing has happened on this project in the past two weeks, and you're way behind and stuck.

It really helps to keep momentum on things. 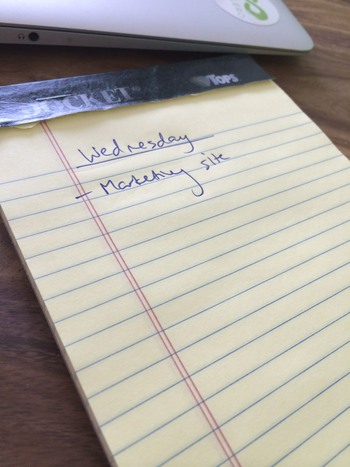 The other variant is to focus on one project, at the expense of (almost) everything else. Like right now, my exclusive focus is on finishing the new marketing site for Simplero. It's a big undertaking, and at times it feels like pulling teeth, but it's important, and it is the most important step in the growth of the company at this point. So this has priority over everything else.

If I don't make it a priority, chances are it won't get done, because there are many things I find  more fun, like implementing new features or streamlining the user interface.

After this, we're going to focus exclusively on onboarding and training materials for the next two weeks. After that, we'll focus on getting our affiliate program up and running for real.

These are things that we've been "wanting" to get to for a long time, but without a very clear and hard focus, it hasn't happened.

So that's my other strategy for getting things done. At some points one is more appropriate than the other. Both are good tools to have in your virtual tool belt.