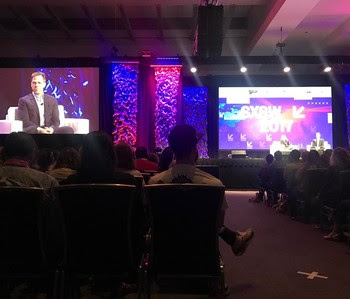 I'm in Austin for the big mess that is SXSW, aka south-by. It's my fourth time here, and it's interesting to see how it's changed. It was Gary Vaynerchuk who originally told me I HAD to go to this, and that was in 2010. I went in 2011, and again in 2014. This year I wanted to go as well, but not so much for the interactive part, which is what I've gone for in the past, but for the music part, to see what's going on in the music scene, make some connections, and learn some new things.

Once here, I realize, hey, wait, I'm also making videos, and there's another whole part of SXSW, which is all about film! The big three tracks are Film, Music, and Interactive. So all of a sudden, I'm here, being interested in all three, and I wasn't even planning on it.

Sometimes you go into things not knowing why exactly, and then once you're there, you realize why it was.

I saw Casey Neistat speak yesterday, and he's definitely an inspiration with his videos on YouTube, and his general story of creativity and entrepreneurship. I didn't know much about his background or journey, but he had me inspired.

This week I've once again had the joy of joining a number of wonderful people in talking about life, business and everything else:

This Twitter account will put you in a good mood every time. Via my friend Nick Gray.

Password rules are bullshit. Incidentally, we don't have them.

How I learned that relationships don't have to be difficult and compromising. Nomi's first article for Elephant Journal. Show her your support!