A Response From Simplero

Here at Simplero, we’ve been struggling with coming to terms with what’s happening in America and beyond, and how we can properly respond to it.

It’s not easy, and we think a lot of you can relate.

While we on the team agree on our fundamental values—love, growth, service, integrity, care, freedom, and accountability—we don’t all see the world the same way.

We bet we’re not the only company in this situation.

At first, we came together to write a nice, sweet, fluffy statement that we could all agree on. Because we wanted to say something. Because some customers were wondering where we stood. And, frankly, because our founder had been pretty vocal politically, and it had upset some people.

But that statement ended up pretty bland. It moved no-one.

Let’s be honest. Who needs another bland, boring corporate statement? We’re not a “corporate” company to begin with and have no intention of ever becoming one. Why pretend to be one now, with something this important?

So how about we just be real with you?

Would that be okay?

Good. Let’s start at the beginning.

Every single one of us was deeply concerned when we saw the murder of George Floyd. That was horrible.

We’re all 100% for human life, including black lives. That all humans matter, regardless of race, color, sexual orientation, or political viewpoint, should be so obvious it doesn’t even need stating. But we’ll happily state it nonetheless.

We are all deeply concerned about police brutality. Some people believe it is widespread and particularly targeted at black people. Others are concerned that by seeing events as racially motivated when we don’t know that to be true, we only make the problem worse.

What we all agree on, is we hate to see black people killed. We don’t like to see anybody killed. We all absolutely agree that racism is wrong and needs to end.

We also all agree that bad cops are bad, and good cops are good, and that they probably hate the bad cops, too.

We all agree that lumping all cops together and saying they’re all bad is both incorrect and dangerous. We also agree that our police forces are often being asked to act as social workers and other roles that could probably be better handled by someone else.

We also agree that cops should 100% be held accountable for their actions. We’re for 100% accountability for everyone. We agree that we want to eliminate any racism, whether institutional, systemic, or the regular kind.

We all agree that protests are a perfectly legitimate way to express frustrations and concerns. Some people wonder why it seems like some protests are celebrated, while others are blasted for spreading the virus.

Some people think rioting and looting is never an acceptable way to express your frustration. They also point out that the riots predominantly hurt black people and poor people.

Other people think that a bit of ‘burn the place down’ is justifiable given the level of injustice black people have suffered, and because their concerns have been ignored for so long. Some of us wonder about those white faces seen initiating violence at protests. What’s that about?

We all agree the media and social media often divides us instead of uniting us. It makes us focus on disagreements and differences instead of solutions and similarities. While the racial wounds are very real, it can feel like we’re being manipulated by the media, politicians, and other influencers, who don’t have our best interests at heart.

Some believe that systemic racism is a major issue in our society and that we need to do whatever we can to make up for that injustice. Others ask how exactly systemic racism is defined and measured, and wonder if focusing on it makes us see things as racist that aren’t.

Some people believe that telling a group of people that the system is rigged against them is harmful because it’s going to deter them from putting in the effort required to be successful. Others think it’s just the honest truth, and that instead of encouraging people to work hard, we need to create counterbalances.

Regardless, we all agree that there’s a lot of suffering, and that compassion for each and every human being on the planet is what’s needed, and a big part of what we as individuals and as a team can offer.

In short, while we agree on most of the big things, we each have our own perspective. We each have different experiences and different vantage points.

But we can still work together.

We can still have open and honest dialogue.

We can still learn from each other and grow together.

Because if there’s one thing we all believe in, it’s in the right to have a diversity of opinions, and not be ashamed or scared of voicing them. We know that’s the only way we stand a chance at actually solving these problems.

There are no easy answers. No simple solutions.

We need lots of ideas, robust debate, and lots of small scale testing of potential interventions.

In short, we need all hands, all eyes, all ears, all brains, and all hearts on deck.

The stakes are that high.

We’ve started the dialogue internally, and we’d love to encourage everyone to speak up and have these conversations in a kind, curious, respectful, and intelligent way, so we can find the best possible solutions.

Will you join us in that? 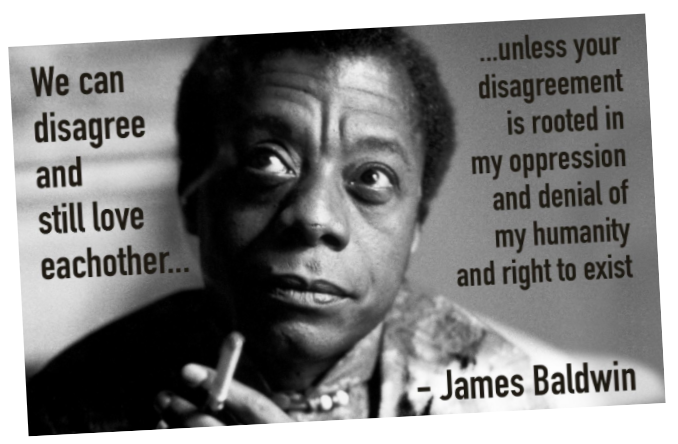