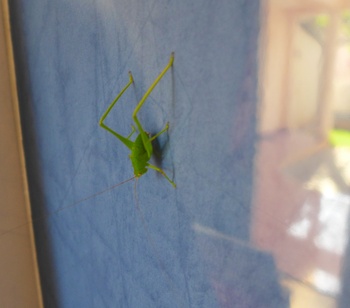 A while back, I asked Gay Hendricks, what is the number one piece of advice he would give me? His answer: Find those pockets of fear, and turn them into flow by breathing into them. That phrase took on a new meaning for me last night.

I was lying in bed, having trouble sleeping. A couple of things transpired. An old painful sadness came up, which caused a bump in my relationship with my wife. Plus I had to get up at 4.30 to catch an early morning flight to Chicago.

So I laid there, allowing myself to feel that sadness like I normally would. But this time, I felt inspired to ask myself the question "what if this is really fear? can I breathe into it and turn it into flow?"

I tried it, and boy was it powerful. It felt like there was a whole layer of fear-based structure around that feeling. Layers upon layers, in fact. I breathed into it, allowing it to dissolve into flow, and it gave me such a rush of energy in my whole body. I kept breathing into it, and the rush kept going.

I'm not sure how long this went on for. It wasn't like I then fell right asleep - it was quite a rush.

Eventually, I did fall asleep, though. Then at 3.30, my puppy started barking at some sound, and I couldn't sleep after that. So I got about an hour of sleep.

But screw all that. I learned a lesson for life. This is such a cool new tool, I'm going to keep playing with it.