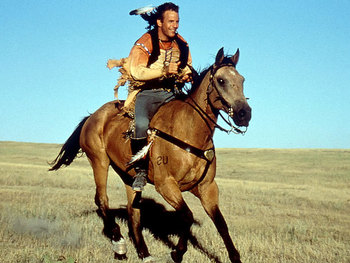 When I was in high school, I went to see the movie Dances with Wolves with my mom, my brother, and my aunt. It touched me deeply. After watching it I felt like crying. In fact, I desperately wanted to cry. It felt like there were tears right there beneath the surface, but I couldn't get them to come out. I hadn't cried for as long as I could remember.

When we got home, I went for a walk, alone, with our dog. It was night. Quiet. Nobody on the streets. I tried again to see if I could cry. It was too scary with people around, so maybe it would be easier if I were alone. It still didn't work. I never shed a tear.

It wasn't until years later, in Mexico in 1998, that I managed to cry. I got in touch with a deep, dark, painful part of me. It felt like there was some black awful part of me that if other people discovered it, they would immediately reject me. When I closed my eyes and really allowed myself to veer into it, I could feel it, I could feel the pain. It felt like such an important thing to get in touch with this pain, rather than keep running from it.

After I got home from that trip to Mexico, my girlfriend told me in no uncertain terms that she was not interested in me pursuing any feelings like that any further. Her father had died when she was young, and that had been very painful, and she had survived by just keeping her head above water, and never going there. I had no business thinking I'd experienced pain, no business feeling those feelings.

I convinced myself that she was absolutely right. My friends suggested that this was the most loving thing anybody had ever done for me. I agreed, and continued to bury my feelings for another decade.