From Head to Heart 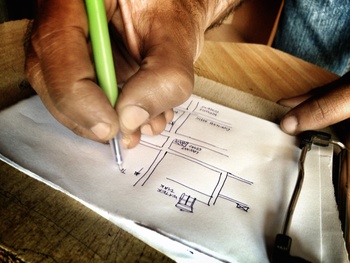 I was talking with a good friend the other night, and we got talking about what he was going to do next and when. He'd clearly been thinking a lot about this, and had a lot of good arguments and reasons, but still was non the wiser. I felt the urge to go along with him into headspace, searching for just the right strategy that would solve his problem. But I resisted.

I know that place very well from myself. I used to have post-it easel pads plastered all over the walls of my house, and engage anyone I could into a frantic search for The Answer. Answers to questions like Who Am I, and What Should I Do With My Life. I was hoping that if I just got it boiled down to the absolute perfect most concise bullet points, then I would know. I would have the answer.

But I know it doesn't work that way. When we're running around in circles in our heads, the way out is not to spin faster - it is to open up to another level of consciousness. To open up to the vast intelligence of our bodymind. To open doors inside of ourselves that have been closed off for years.

A few months back, as I was lying in bed trying to fall asleep one night, I felt the pain of not being that person who radically transformed an entire industry while still in my twenties, like my heroes Steve Jobs, David Heinemeier Hansson, or Bill Gates. I desperately wanted to be that person, but I'm 40 now, and it just didn't happen that way. That apparently wasn't what I was here to do.

That particular night in September, I cried tears of pain over not being that person that I thought I should be. They were good tears. They were the tears of a door opening that had been shut for many years. The door that said "I'm not that person". Instead I was busy trying to make myself and others believe that I was. That I could still be that person. There was just a little delay, that's all, but I was totally on my way to being the next Steve Jobs.

By being willing to open that door, feel the pain, cry the tears, I was able to free myself from the prison of "should", and open up to a new level of curiosity about who I actually am. And that is the way out when you're trapped in your head.

You can't make it happen. You can only create the circumstances that will allow it to happen. You can be willing. You can be curious. You can create the opening in consciousness where the new awareness can land. You can set the intention. And then you can get out of the way and allow the Universe and your bodymind intelligence do its work. Which it will. On its own time.

With my friend, I was able to help him open up to that deeper place where the answers could land. The temptation for me is to go into the place of "I need to have the answer". I can't have the answer. It's not possible. Only my friend has the answer, and the answer will only reveal itself when he allows it.

It was such a gift to be able to guide my friend to that place, and in the process continue down my own path from Head to Heart.