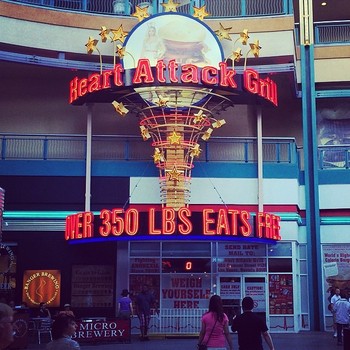 As I mentioned, I came across this placed called Little Vegas, which is basically a bunch of machines that will happily take your money in exchange for a few seconds fun. And I have all of these voices in my head saying they're dangerous evil places.

But then I realized, hey, what's so evil about them? They might not be my particular taste, but I've actually never given them a fair chance, and if my kids like them, what's the problem? Everything else around is equally expensive, so whether they go bowling or climbing or skating or slot machining, what's the big deal? You pay, you have fun for a while.

So I decided to let loos a bit. Let them have some more money to play with. And I noticed, it wasn't that dangerous at all. In fact, they had a lot of fun, we had fun together, they got to experiment with things, and it was wildly mind-expanding for them, because both their mother and I have similar programming in this area, so they're totally not used to being allowed to play with money like that.

What I realized that the whole fear around places like that is an upper limit, plain and simple. It's a way of contracting, of making sure that the joy will end and fear take its place. We'd been having such a great time for 3 days, it was a way to start to create a little anxiety to balance things out.

And normally I would have fallen for it, hook, line and sinker, and it would have put a damper on the mood.

But this time I managed to catch myself in the process, and find within me the willingness to expand. As a result, we could all instead share the joy of breaking down mental barriers and opening up to new possibilities.

Upper limits show up everywhere, and they're so easy to go beyond - if only we're see them for what they are and become willing to expand.