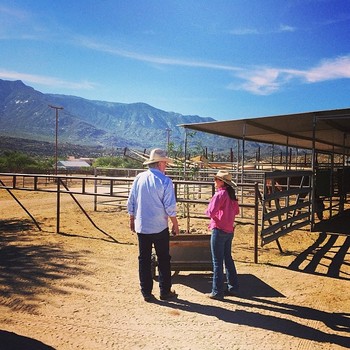 During Wyatt Webb's "It's Not About the Horse" workshop last week, I got to a point on the third day where I felt like I wasn't getting much out of the workshop. I thought the things people were saying were uninsightful, I thought Wyatt was doing a poor job facilitating the workshop, I thought about how I would run the workshop differently myself. It was all bullshit, of course, but such is the mind.

But then Phoebe raised her hand and brought something up that she wanted to work on. Wyatt handled it expertly, the group responded lovingly, and it turned out that Phoebe's vulnerable sharing with the group touched the hearts of many of the other members, and release and healing and insights were bouncing around the room like crazy. It was everything that good group therapy can be.

That day I went back to our room, and I realized I was playing my old pattern of keeping my wisdom to myself and being annoyed that others didn't say what I had in mind, which was "so obvious". I was putting myself outside the group, watching detachedly as an outsider.

I also decided to take responsibility for getting value out of the workshop, by taking the time to come up with something for me to work on, something with meat and substance, instead of just waiting and hoping it'll magically reveal itself to my conscious mind. Once I put a little time in, it wasn't that hard to find it.

When I grew up, I didn't feel safe anywhere. I didn't feel safe at home - I was afraid of my parents, and I felt wrong all the time. At school, there were a group of bullies waiting to ambush me everywhere I went. Out of the about 7-800 students at the school, they had picked me as their favorite victim. I could be attacked anywhere, at any time. When it was snowing, I rarely dared to venture outside. It wasn't just that it was painful and scary, it was the sly viciousness of it that got to me.

As soon as I started to talk about this, the tears came rolling down my face. It continued on for a long time.

The day before, Wyatt had done an anger release exercise with Phoebe. I've done a few before, one with Debbie Ford, and one alone, at home. It feels so great to finally get some of that stored-up anger out of my system. It's there anyway, and holding it down ties up so much energy, it limits my power. I've felt like I needed some anger release for a while, so when Wyatt mentioned that that was one of the things he did, I knew I wanted to do it.

I asked if he'd let me bang some pillows into the wall, and he said "of course". We did, and the tears came rolling harder. I asked if I could hug him, and I did, crying my tears on his shirt. It's very healing for me to connect with benevolent, healing father figures like that.

But all that is bullshit. What matters is that little boy inside of me experienced a lot of fear and pain. And if I don't take that seriously now, I'm just replaying the pattern of the adults in my life back then not taking my feelings seriously, and the cycle of violence is perpetuated. The time to honor those feelings is now.

Once I started sharing and working with this, it touched others in the group as well. Suddenly I felt part of the group. I could receive their love. We could feel each other much better.

I'd moved from my head down into my heart and body. And that is the longest and most challenging travel distance I may ever have to do. For someone like me who is very strong mentally, and whose whole survival was to cut off all feeling and retreat up into my head, it's difficult, to say the least. But it's so worth it.